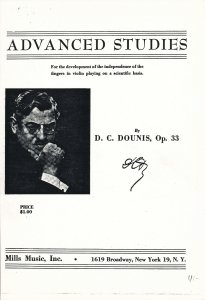 Demitrios Constantine Dounis (1886) was born in Greece, received a degree in medicine from the University of Vienna, had a brief career as a concert violinist and then returned to Greece, where he was a violin professor at the Salonika Conservatory and wrote many of his pedagogical works. He later settled in the United States.

Unlike Ivan Galamian, the teaching career of Dounis consisted, for the most part, of giving master classes and helping mature professional musicians solve problems in their playing, rather than developing prodigies or holding an appointment at a major conservatory. Therefore, his recognition as one of the most influential pedagogues of the 20th-century has been belated. Among his disciples are the well known violinst David Nadien, former concertmaster of the New York Philharmonic Orchestra from 1966 to 1970 under the baton of Leonard Bernstein and currently teaching at the Mannes College of Music, New York, cello teacher George Neikrug and the late violist, William Primrose and among his students were concertmasters of major orchestras, including Joseph Silverstein.